At Asoryu Aikido Club, Sensei Billy McAuley teaches Traditional Aikido with a strong emphasis on the basics (kihon) of Aikido:  Through the influence of Asoh Kinjo Sensei, Sensei Billy firmly believes that having a solid foundation in the basics of Aikido is essential for the proper development and progression of all Aikido practitioners (aikidoka) in their practice of Aikido. Sensei Billy also believes that armed with good kihon based on the teachings of Asoh Kinjo Sensei, Asoryu Aikido Club's aikidoka should be free to participate in training from a wide range of resourses. Sensei Billy does not believe in restricting his students from the experiences that are available in the wider world of Aikido and encourages his students to broden their Aikido horizons at every opportunity

Asoryu Aikido Club is named in honour of Sensei Billy’s Japanese Aikido sensei; Asoh Kinjo Sensei an Aikido 7th Dan Aikikai Shihan of the Aikikai Foundation, Tokyo, Japan, who, in 1993 sadly succumbed to cancer: Sensei Billy has travelled extensively and has had the privilege of taking Aikido instruction from many of the world’s leading Aikido teachers:

A True Inspiration to All...

From the end of the nineteen fifties, Asoh Kinjo Sensei trained in Aikido at the Hombu dojo, Shinjuku-ku, Tokyo and a couple of other dojos (one was the Sukiyabashi dojo). As a younger man, he did judo and a little boxing. He then did ice skating (speed) seriously for many years. From ice skating he learned always to move your face before starting a movement – first move your face in the direction you want to move, then your legs and hips and finally your shoulders and arms. He also did ballroom dancing - apparently quite energetically - in the days of dance halls and that perhaps had some influence on his smooth irimi (entry) and footwork

As a younger man, he had his own company with an office in the Ginza in central Tokyo. He happened one day in Hibiya, Tokyo to see a demonstration of Aikido by O Sensei. He said “it looked suspicious” so he wanted to find out more. When he realized it wasn't “fake” he wanted to learn more about it and so he started his training in Aikido. He didn't start his training in Aikido until he was 53 years old. Because of his early experiences in judo, boxing, ice skating and dance he was still very fit and trained as hard as anyone else (8 days a week they called it - every day and twice on one day - maybe Saturday). He described how the student’s shoes would always feel loose after training because they had lost weight

From the beginning his students were taught to do techniques completely without any power. Usually it's the other way around - you start off learning techniques and gradually with experience you learn to lose power. Asoh Kinjo Sensei’s way of teaching Aikido is rather fast - a kind of shortcut

Asoh Kinjo Sensei spoke perfect English (as well as some German - enough to read books for pleasure in the original German - and a little French and Russian). In 1964 at the Tokyo Olympics, O Sensei gave an Aikido demonstration and Asoh Kinjo Sensei did the oral English translation for this event. At that time Asoh Kinjo Sensei still had no intention of becoming an Aikido teacher. That just kind of happened

Asoh Kinjo Sensei taught Aikido at Minato-ku Aikikai which was and is quite a large and interesting public dojo in the south of Tokyo. At first, including Asoh Kinjo Sensei, there were four Aikido teachers, the other teachers were as follows: 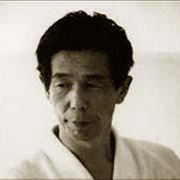 Hari Sunao Sensei 7th Dan - a famous cartoonist in Japan, he sometimes appears on TV too as a singer. He has a dojo in Tokyo, Hari sensei’s main dojo is in Kyushu (Japan's south island). He comes to Tokyo every week by shinkansen (bullet train) instead of by plane because he likes to draw on the train 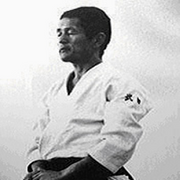 Takeda Yoshinobu Sensei 8th Dan - who teaches Aikido at Kamakura and has many affiliated Aikido dojo in Australia, he has recently become quite famous for his ‘no-touch’ Aikido

On Sensei Niall Matthew’s first day in Japan he met someone from Asoh Kinjo Sensei’s dojo by chance. Sensei Niall always thought it was fate - not chance. This man talked about Aikido and about Asoh Kinjo Sensei and it sounded mysterious. Sensei Niall went to the dojo with him and saw a Japanese Aikido teacher in his seventies get grabbed by a big American marine and then witnessed that the teacher just tossed the attacker away like a slice of bread.  I believe it was also fate when back in Japan after having seen Aikido in the UK; Sensei Billy McAuley also met the same big American marine who in turn introduced him to Asoh Kinjo Sensei and Minato-ku Aikikai. Sensei Billy was fascinated and hooked from day one

While Asoh Kinjo Sensei's funeral was a very sad and difficult day for all of his students, our spirits were nevertheless lifted by the great number of the highest ranked Aikido teachers including the then Doshu (World Head of Aikido) and Waka Sensei (Young Teacher i.e. O Sensei’s Grandson, Waka sensei is now Doshu and his son is now Waka Sensei i.e. the great grandson of O Sensei) who came and paid their respects to a true Aikidoka and a fine man 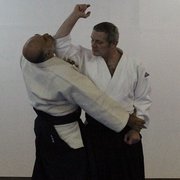 I remember our Aikido teacher Asoh Kinjo Sensei telling us that the Japanese word for Martial Arts is Budo (fighting technique), but that Aikido was not Budo it was Bushido (the way of the warrior) and that those who follow Bushido are known as Bushi and that for them Bushido is an all- consuming way of life that requires a dedication and a commitment way beyond what normal individuals can comprehend or even imagine: Asoh Kinjo Sensei 7th Dan Aikikai Shihan was a Bushi and, although it took me a long time to understand it, I now know that Sensei Niall Matthews is also a modern day Bushi

On his first day in Japan Sensei Niall Matthews was introduced to Asoh Kinjo Sensei and to Asoh Sensei’s Aikido and this chance meeting was to have a profound effect on Sensei Niall and on how Sensei Niall was to live his life from that time onwards. Following his meeting with Asoh Kinjo Sensei, Sensei Niall began his Aikido training as a student of Asoh Sensei at Minato-ku Aikikai Dojo, Tamachi, Tokyo, this was in the very early 1980s, I believe this was in 1981. When I later joined Asoh Sensei in early 1985 Sensei Niall was already at 1st Dan level and was my sempai or in English my senior, in Japanese it would be more accurate to describe one’s sempai as a mentor or guide much more than simply a senior

Once grounded Asoh Sensei encouraged Sensei Niall to seek out and train with particular Aikido teachers that Asoh sensei both respected and felt that Sensei Niall would benefit from their teaching. One of those teachers included Arikawa Sadateru Sensei 9th Dan Aikikai Hombu Dojo Shihan

Although there are very few videos available of Arikawa Sensei because he was, like Asoh Sensei,

a very deep and private person and did not like to be photographed or videotaped, Arikawa Sensei was, nevertheless one of Aikikai Hombu Dojos finest and most respected (feared is more correct)Aikido teachers. And for more than 13 years Sensei Niall Mathews was his Uke and Deshi

In Sensei Niall’s own words he says that “I have been lucky to have been the Deshi of two of the best Aikidoka in the world. My first teacher was Asoh Sensei. I have never seen anyone approach his level. Taking his uke was like going on a wonderful journey together just for a moment in time. I was Arikawa Sensei's uke at Aikikai Hombu Dojo until his death and I suppose I was his only Deshi. Arikawa Sensei was famous for his fierce Aikido, but his control was always perfect”

I have known Sensei Niall Matthews for over thirty years and I have seen his very severe training and his tough training regime and I have never once heard him complain. Sensei Niall is a person who is possessed of the very rare qualities of total commitment and total dedication. I have, in my time, met only very few people who can claim these attributes

Written with great respect for an awe inspiring sempi by Sensei Billy McAuley. Thanks for being my mentor and guide in Aikido for so many years and also for being my friend

Sensei Billy McAuley, 5th Dan began his Aikido career at this dojo. While interviewing translators and interpreters in Tokyo in 1984, Sensei Billy came upon a rather large American guy who was ex-military, married with children in Japan and who was a 3rd Dan Aikidoka at Minato-ku, Aikikai. As Sensei Billy had recently seen Aikido while on a visit to the UK, he expressed an interest in seeing Aikido to Tim Keenan (the American guy). They met at the dojo, Sensei Billy was given a rather large doji (which he wore for several years). He was then taken in and introduced to Asoh Kinjo sensei to the words “this man wants to start Aikido”. His first evening was spent with Akasaka Keiji sensei standing up and falling down, he was exhausted but, exhilarated by the end of the evening. And ‘that was that’ as they say, for about ten years he was a practising member of Minato-ku Aikikai and left as a 3rd Dan Aikikai. He loved his time at the dojo and with all of his sempai and eventual kohai.

Sensei Billy would like to say thank you, in particular to his sempai…

Akasaka sensei who treated him like his brother, Negishi sensei, Asaba sensei, Kisawa sensei (who taught Sensei Billy so much), Yoshinari sensei, Nagai sensei and also all of his other fellow Aikidoka particularly Suzi san. Sensei Billy misses you all and would still love to be going with all of you to the New Tokyo, Tengu, and the many other places where we all shared good food, great beer, excellent companionship and so many wonderful times together 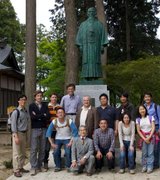 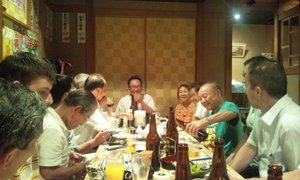 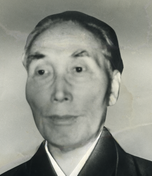 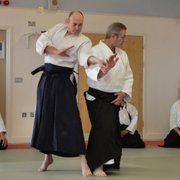 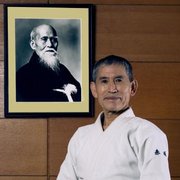 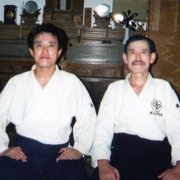 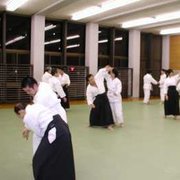